I was able to put the new loaner Dexcom on Monday, at the dr’s office, and it worked great. I never lost a signal throughout the night, and woke up Tuesday morning and everything looked good.

Tuesday night, as I was stepping over a Lego in my son’s room, I bumped into the door frame, subsequently knocking off the Dex. #whompwhomp

Luckily, it did not hurt when it came off, but I was super bummed because by that point, I had only had it less than 48 hours.

I called my dr’s office Wednesday morning when they opened to see if I could run by to get another one put on .. the nurse was super apologetic and checked with the billing department. Unfortunately, insurance would not approve a 2nd trial sensor, but she said if I wanted to swing by, I could pay out of pocket for one. I opted not to do that. I luckily had two friends offer me one from their personal stash (thank you, Suzanne and Krista!!!) so I was able to get one and then just had to figure out how to put it on myself last night. 😉

I found a YouTube video on inserting the Dex, and it was very simple to do. Again, like the first time, it did not hurt at all. It still just felt like a pin prick.

Here are my thoughts as I’m a couple of days into this now:

The tape on the first one did not stick well for me at all. It was already bubbly after the first couple of hours of wearing it. But I’ve been told now by many that using Skin Tac helps tremendously – and I was able to use some when I put this 2nd site on. (It is very sticky! Even my shirt was sticking to the area for a little while.) 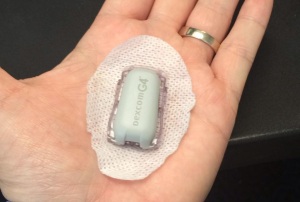 The tape area is still very itchy – it was itchy on my arm site and it’s still a little bothersome on my abdomen site.

I put on the new site around 8:30pm last night, and had to wait the 2 hours to calibrate. I was high (bad swag’ing at dinner apparently) so I had the high alarm go off a few times after I’d gone to bed – but it was not too bad.

But as much as it’s a tad uncomfortable/unattractive to wear, I am loving the data and the technology aspect of it – I love the fact I can see it on my iPhone. And that my husband can see it on his, especially when he’s traveling. I’m not a huge techy person, so that stuff is not usually a big deal to me. But for some reason, I’m loving these feature on the Dexcom.

Another big difference I’ve noticed is that when I wear my Medtronic sensor on my arm, I cannot sleep on that side that the sensor is in, because I get a “Lost Sensor” error throughout the night. But Monday night, I slept on the side that my sensor was in, and I had no problems. Same thing with last night – I slept on the side that my current sensor is in on my abdomen, and had no problems and never lost connection with the receiver. During the evening, I left it sitting in the living room and was able to go throughout the house and never once lost the signal.

So, overall, I’m still very happy with it .. I’ll get to wear it until Monday so we’ll see what happens between now and then! 🙂

I am a wife, a mommy, and a Type 1 diabetic (since '92.) I have had two successful pregnancies - one of which was with twins. I wear an insulin pump- - off and on for 21 years; most recently on the Medtronic pump and Dexcom CGM. I am not a medical professional, nor am I giving medical advice. I am just sharing my day to day stories of someone who lives with this disease every day. My ultimate goal is to raise awareness.
View all posts by Shannon →
This entry was posted in Uncategorized and tagged CGM, continuous glucose monitor, dexcom, medtronic, type 1 diabetes. Bookmark the permalink.